THE RICH HISTORY OF THE AMERICAN CHESTNUT TREE

The American chestnut tree has a history unlike any other tree in the world.  Commonly reaching up to 100 ft in height by 10 ft in diameter and prized for the superior strength and quality of its timber, the tree played an integral role in the economy and culture of early America.  Chestnuts grew faster than other hardwoods and were rich in tannins, making them highly resistant to decay and commercially valuable as timber used for construction and furniture.  The deciduous tree hails from the beech family and was once one of the most common trees in the Northeastern United States. There were billions of American chestnuts stretching from the Atlantic Coast to the Appalachian Mountains and the Ohio River Valley.  The United States and its national character were profoundly shaped by America’s seemingly unending forests and the early timber industry, and American Chestnut was the towering giant of that industry for a large swath of the country.  The tree provided important ecological benefits, feeding wildlife with its nuts and nourishing the soil due to the above-average mineral composition of its leaves.  It also played a crucial role in subsistence farming throughout its range due to the reliably high-volume of edible nuts it produced each year. 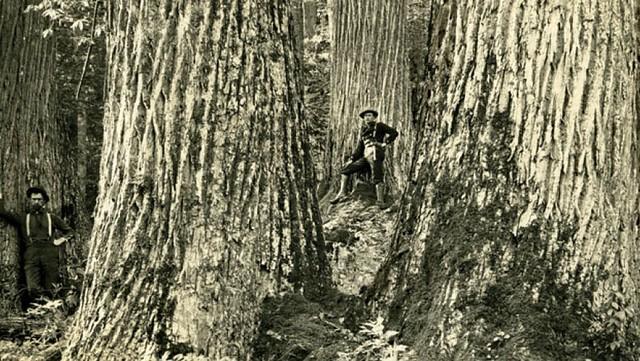 AN UNEXPECTED DOWNFALL: THE CHESTNUT BLIGHT

Today, however, few people have heard of the American chestnut and even fewer know of its historical significance.  Beginning around 1900, the population of American chestnuts collapsed due to the chestnut blight, a disease caused by an Asian bark fungus.  The disease was accidentally introduced into North America by imported trees from Asia and was first noticed in the Bronx Zoo in New York City in 1904.  Around this time, there were an estimated three billion chestnut trees in North America.  Within a few decades, the tree was functionally extinct and today it’s estimated that there are fewer than 100 trees surviving in its historical range.  The chestnut blight has been called the greatest ecological disaster to hit the world’s forest in all of history.  Attempts to reintroduce the species have been ongoing for decades, consisting of everything from cross-breeding, to genetic engineering in recent years.  Although American Chestnut is functionally extinct, untold thousands of barns, houses, churches, and other structures were built during the 16th through 19th centuries using its timber as siding, flooring, and beams.  Because of the strength, stability, and rot-resistance of the American chestnut, much of this wood has decades of useful life left and is primed to be reclaimed and repurposed.  After milling or brushing off years of weathering and patina on the surface of a board, you expose beautiful and perfectly usable wood from a bygone era.  In many cases, the saw marks remain from when the timber was originally harvested.  The material retains character that is unable to be replaced by anything other than decades or centuries of age, and brings a piece of American history to any project.

At Delta Millworks, our roots are in reclaimed wood.  The company was founded in the early 1980s on reclaiming and repurposing longleaf pine, another important wood species predominant in the Southern US that was ravaged by over-harvesting and clear-cutting.  In our view, working with reclaimed chestnut fits right in line with what the company was founded on in 1985.  We’re proud to play a small role in the story of this amazing wood species by promoting the use of reclaimed chestnut to the architecture, design, and building communities.  And we believe promoting its history is as important as the wood itself – each piece of reclaimed American chestnut that Delta Millworks produces is a piece of our collective history, a relic of ancient forests, and a lesson of caution for the importance of sustainable forestry and building practices that we all need to hear.

Can Genetic Engineering Bring Back the American Chestnut?

American Canopy: Trees, Forests, and the Making of a Nation

Contact us through our inquiry form or give us a call at the number below. Our highly specialized team members are ready to help answer any questions you may have, as well as advise you on the specifics of the project you are working on.